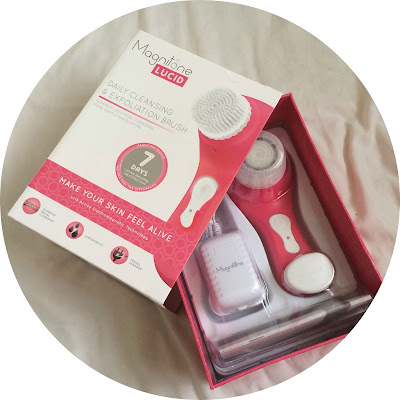 A couple of weeks ago i was sent the Magnitone Lucid by a website called "Everything Cosmetic" , I had to try it for 4 days before submitting my review to them to go on there website. I wasn't paid to do this review, but i was sent the product for free in exchange for a review.

Before writing up a full in depth review for my site i decided to use it a bit longer before doing so, I've now been using the Magnitone Lucid since 29th June, so now feel that a longer review can be written.
When i first opened the box i was really happy to see i had been sent the pink version of the Magnitone Lucid, i loved the fact that it wasn't some big heavy brush either, it was kind of small and lightweight.
I also love the fact that the charger is all done through the little white magnet which the mains charger plugs into and that the magnet just sticks onto the front of it, and that this completely comes away from the facial brush. Whilst its charging the red light on the front of it flashes on and off consistently and then when its fully charged it just stays red.
I put this on charge when i first received it to make sure it had a full charge on it so that i could see how long it held charge for before needing to be charged again, so i fully charged it on the 29th June and I've been using it twice a day and it still doesn't need charging again yet. When a product keeps charge for as long as this does it really impresses me, as i travel to London quite a bit and sometimes stay for a week at a time and this means i can take this with me without having to pack all the charger aswell, and then worry about leaving the charger behind haha.

On the Magnitone website it claims to do the following:
"Use Lucid for just 7 days and we promise to leave you with softer, brighter & clearer skin."
"They naturally unclog pores, and sweep away dry and dead skin cells, leaving a clearer complexion" 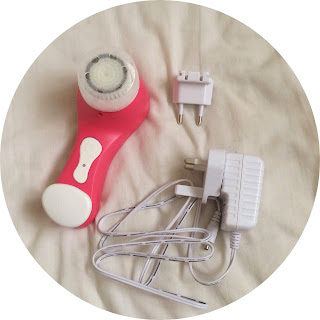 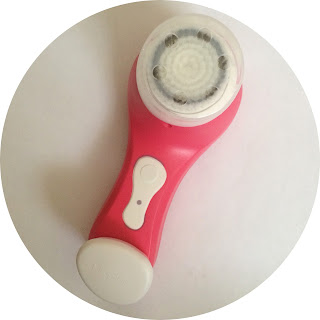 This was the first time i had ever used any sort of cleansing facial brush, as i always had that fear of it being too harsh on my skin, but with the Magnitone Lucid i didn't have to worry about that as it has 2 different settings built into it. There is a deep clean setting and also a sensitive mode setting, you press the "on" button once for the deep clean or you can press it twice for the sensitive mode.
Also built into the Magnitone Lucid is a "1 minute auto-stop function" and a "20 second zonal timer", and this basically means that you'll spend 20 seconds on each area of your face before the Magnitone Lucid beeps so you know to move to a different area so as not to over cleanse your face, and after 1 minute it will automatically switch itself off.
This product is also fully waterproof so it can be used in the shower or bath without adding extra time to you getting ready.

I also like the fact that you don't need to buy a separate cleanser or face wash to use with this, as it works with whatever your choice of product is...I personally choose to use the Body Shop Tea Tree Skin Clearing Facial Wash with the Magnitone Lucid.
Do you ever get little white bumps that tend to be under your skin but not noticeable to anyone but yourself? I had quite a few of those on my chin area and a couple on my forehead aswell, and these have since disappeared completely after using this cleansing brush. It has also helped to clear any blemishes that i had and kept them at bay so they don't return that often.

Although lets admit when using this cleansing brush it splashes everywhere haha...poor mirror in the bathroom had a right good wash with all the dots of water all over it........has this happened to anyone else that uses this cleansing brush, or is that just me? lol. 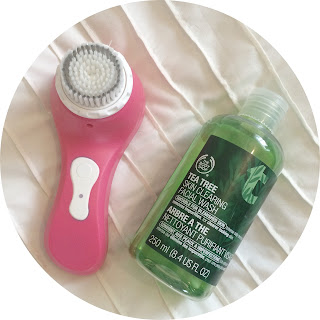 After using the Magnitone Lucid for a while my skin felt so much softer even after the first use which i loved, I tend to alternate between the 2 settings though, i will use the deep clean mode every 2 days and then the sensitive mode in between and this has really made me see a difference in my skin.

I've inserted a before and after picture, and you can already see how much smoother my skin looks already which I'm really pleased about :-)

I would definitely recommend the Magnitone Lucid to anyone who is thinking of trying a facial cleansing brush for the first time as after just 4 days of use, i feel more confident in the way my skin both looks and feels.

You can buy the Magnitone Lucid over on there website for just £69.99 in a variety of colours, and if i wasn't sent this product for free in exchange for a review, then i personally would of gone and brought it myself, as i wouldn't be without this facial cleansing brush now.